The former CEO and co-founder of Sun Microsystems Inc. (now part of: http://www.oracle.com) is the creator of a new startup. It provides a new social media service called Wayin. The service launched on October 5th and is a application in the realm of opinion polls.

Users of the network can vote on polls but also can easily create their own polls. Polls present themselves as an image with the questions superimposed (see example at right). Polls will mostly be on current shows in Sports and TV but also on other issues. 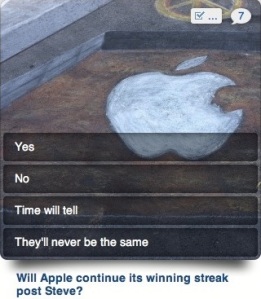 Screenshot from a current poll at Wayin.com

WayIn start-up
Mike Schmitz, who says he’s senior director of consumer products and marketing at WayIn on his LinkedIn profile, has the most detailed description.

“WayIn is a platform where consumers can play user-created games while watching television or live events,” he said. Schmitz “designed and managed our multi-device platform, which includes the iPad, Samsung Galaxy Tab, iPhone, Android, and the consumer Web site,” and that he “created the company’s consumer strategy of recruiting ‘Super Fans’–a group of users interested in specific sports or television programming to create game content.” (Quote from Cnet News)

Independent Information and Communications Technology Strategist with an interest in the construction sites between business, society and technology. http://www.hellmuthbroda.com
View all posts by Hellmuth Broda →
This entry was posted in New and Noteworthy, Social Media and tagged Games, Gaming, Scott McNealy, Social media, Sun Microsystems. Bookmark the permalink.