We knew it all along: Walking is good for you. While walking we turn 20 Watts of power per foot into heat. But now researchers in Wisconsin have found a way to charge batteries with a firm stride.

Tom Krupenkin and J. Ashley Taylor are using an electrostatic capacitor but “with a conductive solid substrate, which they topped with droplets of an electrically conductive liquid. On top of it they placed a metal electrode coated with a 10- to 50-nanometer-thick film of an insulating material.

“That meant that the gap between the metal electrode and the conductive liquid electrode was a mere 10 to 50 nanometers. The bottom conductive substrate and the top electrode were then connected into a circuit. So when the solid electrode was pushed down, compressing the liquid droplets, or pushed laterally over the top of them, the device produced a very large capacitance and voltage. If scaled up to the size that would fit in a typical shoe, this would enable the Wisconsin researchers to harvest 2 watts of power, they report today in Nature Communications.

“At that rate, a person could completely recharge a standard cell phone battery by going for a 2-hour stroll, Krupenkin says.” [ . . .] Krupenkin and Taylor have formed a company called InStep NanoPower in Madison to commercialize the new technology. They are currently working to produce a prototype device that can be fitted into the sole of a shoe, which they expect will be ready in 2 years” (Quotes from article below). 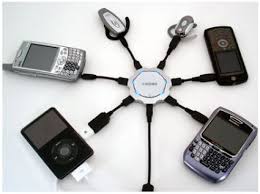 While you lose weight your electronic gadget recharges. But to charge all your gadgets you will have to do a lot of striding!

“I have to walk around the block, darling, my phone’s battery is dead.” Will this be still a lame excuse?

Independent Information and Communications Technology Strategist with an interest in the construction sites between business, society and technology. http://www.hellmuthbroda.com
View all posts by Hellmuth Broda →
This entry was posted in New and Noteworthy and tagged Battery (electricity), Capacitor, Drop (liquid), Electrical conductor, Mobile phone, Wisconsin. Bookmark the permalink.